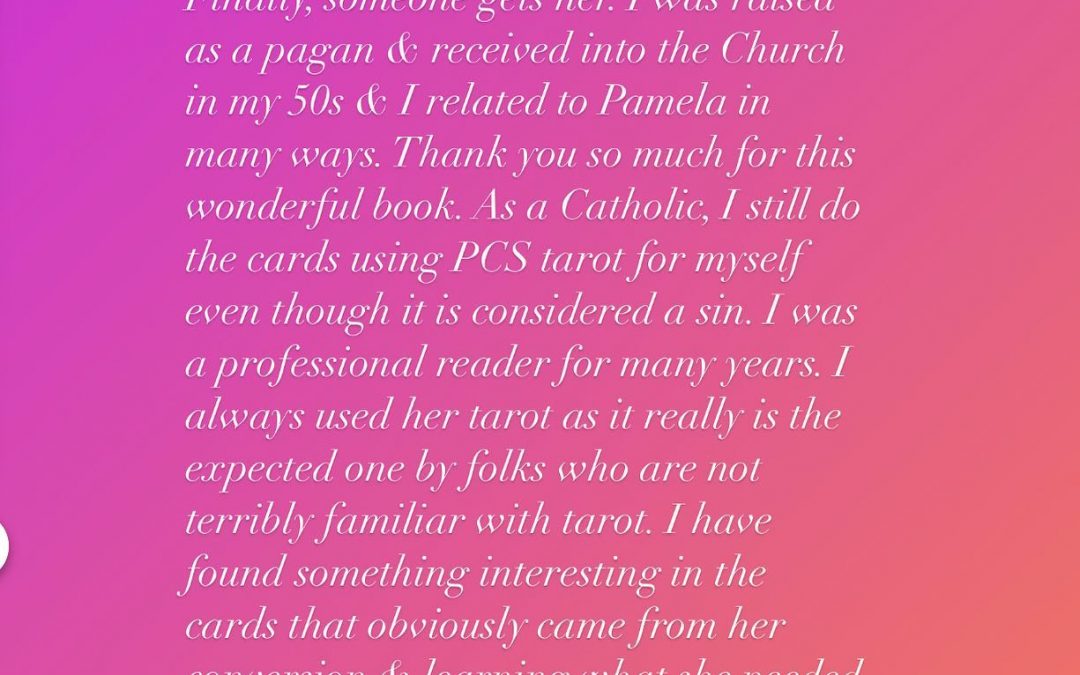 The reviews are quite an interesting mix, some positive, some less so. It strikes me that people review books based upon their personal preferences and I thank everyone who has taken the time to review my book publicly because it helps others to decide whether it is for them.

Interestingly, this first ‘fan letter’ loves the Catholicism elements in the book, but an Amazon reader thinks I have given the wrong impression of the Catholic faith. It’s always insightful to read people’s views.

The book was a labour of love, not an academic tome. It was about me really just wanting to share my findings on this enigmatic woman that so many wrote off after she moved to Cornwall. I wrote it not to make money or to achieve attention. I largely wrote it to fulfil my own sense of fascination and intrigue. If people like, I’m pleased. If people don’t, that’s OK, too.

I hope everyone who has read it has at least uncovered something about her from my research/writing.

I very much enjoyed reading this book, which offered a fresh approach to biography. I say biography but is it? In my own work, I have been shocked at the way an individual’s life details evaporate when they die if they are not well known. That being said, Dawn Robinson has certainly done her spade work and tracked down a lot of life events on Pamela Colman Smith, especially in the first half of her life when she moved around between the UK and and the US and mixed with the famous: Yeats – Jack and William – Ellen Terry, Bram Stoker and Henry Irving. She betwixt them with her “pixie’ like personality and recitals. Then there was her art: a kind of mix of comic book, Pre-raphaelite and Japanese. Exhibitions – one at Stieglitz’s NY gallery – were well attended. Sadly, it was not a style that withstood the the arrival of modernism but association Alfred Waite of the Golden Dawn brought her a commission to illustrate the Tarot cards, something she described as ‘a lot of work for not very much money’. And, yet, it was to preserve her name as her interpretations have become the go-to deck for those exploring Tarot divination. She then converted to Catholicism and disappeared to Cornwall – after that the trail goes cold somewhat but the author has tracked down some fascinating deals of her life there. An excellent read: Robinson writes with the facts but is also not scared to speculate and explore what went on in the life of this fascinating individual..

A fascinating landscape of a bohemianism & Catholicism

Dawn G. Robinson explores the fascinating life of bohemian artist, Pamela Colman Smith, who converted to Catholicism and attempted to create a catholic flock at her chapel at the Lizard, Cornwall. Pamela was a prodigious artist, creating tarot cards, illustrated children’s books, and many other artworks, only to focus on building a life around a faith-based existence. Ms. Robinson provides a never seen before photographs of Pamela, and explores her world before and after her conversion. Pamela in recent times has been reputed to be a lesbian woman of color in Victorian London, but the research questions this identity in following the facts of Pamela’s life. But more importantly, the book sets out the path Pamela took in trying to set up a Catholic outpost when she took residence in Cornwall. A great read for those interested in Pamela Colman Smith or what happened to those who followed the bohemian life style after WWI &II.

Enlightened by this Pixie

What an incredible book! Well researched and cared for. Dawn has brought forward an immense about of detail on Pamela Colman Smith with the bibliography to prove it. A work of love is exactly what you will encounter when you read this. Yes Pixie did create a most memorable tarot deck yes she was quite eclectic in herself and lifestyle. Unique doesn’t come close to showing the many facets of this woman. Dawn G Robinson did the work and its results are incredible, its all here and also allows one to wonder “What Else?”
Thank you Dawn – I absolutely enjoyed this read and will carry the book in my shop here in Colorado USA!!!!

Rozonda Salas5.0 out of 5 stars An excellent, down to earth biography of PixieReviewed in Spain on 24 April 2020

Verified PurchaseThis is a serious, well-researched biography of Pamela Colman-Smith, artist and illustrator of the Rider Waite Smith Tarot. The author has tried to reflect all sides of Pamela’s personality, has avoided idealisation and has kept to the known facts, with intelligence and respect. Excellent and very recommended.
I would like to point out just a minor mistake: the author says the Golden Dawn’s motto was “Whatever you would have Done Unto you”, a part of the Golden Rule. It is not: it was the motto Pamela chose when she entered the organisation (this is clearly stated in Marcus Katz and Tali Goodwin’s Secrets of the Waite-Smith Tarot, that the author herself uses in her bibliography) Adepts of the Golden Dawn had to choose a motto when they entered it: for instance, Constance Lloyd, wife of Oscar Wilde, chose “qui patitur vincit” (He/she who suffers conquers). I hope there will be further editions of this great book and this mistake will be corrected.

Kimberly3.0 out of 5 stars Could Have Been BetterReviewed in the United States on 16 June 2020

Verified PurchaseGranted, there’s a dearth of information out there on the life of Pamela Colman Smith, and the little there is has been previously published in notable works by Kaplan and Jensen. Pamela Colman Smith’s seminal work was of course the tarot deck she illustrated under the guidance of A.E. Waite; without this accomplishment, it is likely that Colman-Smith would have quietly faded into total obscurity. Yet the author refers to this defining creation of a 78 card deck as a pack of “seventy-two divining cards”. Regardless of the focus of the author’s interest in the subject matter, this critical fact laid the foundation for the continued interest in, and appreciation of, Pamela and her artwork today. There are some interesting speculations included in the book, such as whether Pamela actually experienced synaesthesia, or merely leveraged the current interest in it to promote her art. There is no doubt that she moved in some grand social circles in the early years in NY, hosting social gatherings which included the likes of W.B. Yeats and Ellen Terry. The author depicts the burgeoning women’s movement, which is a fascinating aside. Men dominated the hierarchy of both business and home life. In an attempt to assert some control over their own lives and opportunities for success, some women adopted male names and dressed as men. Romantic relationships between women were considered acceptable. Robinson states that the tarot cards were not looked upon favorably by the church, which is undeniably true. However, many of the cards illustrated by Pamela are based on religious iconography and/or include biblical references (e.g; the Hierophant, the Lovers, and the Ace of Cups). The topic of Pixie’s sexuality comes up, repeatedly; even though each time there is no basis for making a determination as to whether or not she was a lesbian. By the end of the book, this horse is entirely dead. There are a number of typos and incorrect references; the tarot Pixie illustrated was not known as the “Waite-Smith” tarot in 1909. There are some photos included in the book which I don’t believe have been published elsewhere. Pixie’s ultimate conversion to the Roman Catholic faith is not such a stretch in light of her love of rituals and staging. The book is worth a read for its exploration of the changing times that Pixie lived in, and for the peek into what her later years were like in Cornwall and Bude. My biggest disappointment was that the only mention of William Gillette is in the Appendix. He was a famous actor (Sherlock Holmes) and somewhat of an enigma. The home he built, Gillette Castle, has hidden rooms and secret staircases, and there are several of Pamela’s paintings displayed there. One wonders if she actually visited him at that magical place to paint any of the numerous portraits she did of him.

Verified PurchaseI know this book was a labor of love. In my case, I would not have bought this book if it did not address Colman Smith’s conversion to the Catholic faith. The author rightly locates Colman Smith within that flood of conversions of artists, writers, and intellectuals during the early 20th century Catholic revival. And I appreciate the details about her efforts to grow the faith in Cornwall — it’s a pity that those efforts were not better coordinated by the bishop, but in those days it must have been difficult.

Both before and after Catholicism, the author paints a convincing picture of Colman Smith as multi-talented, resilient, eccentric, and sometimes taxing to her friends. Unfortunately, I think the wrong impression of the Catholic faith was given in the book. Whether in Colman Smith’s case or now, converting to the Orthodox Catholic faith is NOT any of the following: comforting, safe, a form of solace, easy, a way of conforming, a way of avoiding intellectual thought, a form of security, an evasion of realism and common sense, or a form of escape from the outside world. As for conversions of former occultists, it still happens today. Please search Amazon to see the long list of books by Carl McColman — formerly these were books about Wicca and magic, now they are books about the spirituality and practice of the Catholic faith.

The author also speculates briefly that Colman Smith’s art — notably traditional and beautiful — fell out of fashion with the rise of modernist art. Colman Smith did not live to see the top-down modernist destruction of her traditional Catholic faith in the wake of Vatican II during the 60s and 70s. If you go to a modern Catholic Church, you are more likely to walk into something that looks like Our Lady of Pizza Hut — nothing that Colman Smith would have recognized. If she was alive today, she would no doubt be an evangelist for the beauty and mystery of the Eastern Orthodox Church in Cornwall! Pamela Colman Smith, we need you — and this book is one more effort to ensure that you get the artistic recognition you deserve.