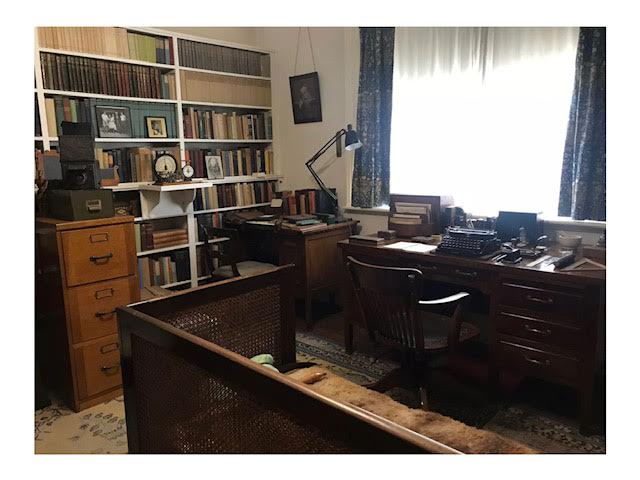 There is something fascinating about seeing exactly where noteworthy writers crafted their works, as if we can absorb some o their creative genius from the ether, so a visit to the home of George Bernard Shaw (GBS), winner of a Nobel Prize (1925) and an Oscar, neither of which he thought much of, gave me fresh insights into the man whose works I studied at school.

Shaw’s Corner was reluctantly taken on by the National Trust. The rather unremarkable Arts & Crafts house is really nothing special except that George Bernard Shaw (GBS) and his wife, Charlotte, lived there for many years. It is also the place where my interest in Charlotte was, quite by chance, sparked. THe house itself is rather dull, brown, of its time, and very masculine.

What I had not known about Shaw then was his work for the Fabian Society as a pamphleteer. He held some strong views; his work for women’s suffrage and his vegetarianism were positives, his liking for dictators less so. Writing was his passion, and he was prolific. How was he inspired to work in this dull place?

Most recently, I happened upon him through his letters to actress, Ellen Terry, the internationally renowned actress he met in 1892 when he was but a journalist of little note. It is interesting how life inter-relates because Ellen Terry also had strong links with Pamela Colman Smith (subject of my latest book). GBS and Ellen Terry corresponded fitfully for three years, then started (in his words) “a paper courtship…perhaps the pleasantest and most enduring of all courtships.”

It seems many men adored Ellen Terry, but Shaw’s correspondence with her lasted for thirty years, at its most intense in 1986-88, only tailing off towards the end (1922). She died in 1928, but he lived until 1950. There is more on his work here. His rhetoric on marriage and the family was controversial:

”Women have never played an important part in my life. I could always discard them more readily than my friends …women have been a ghastly nuisance.’

I read that he was not only a teetotal vegetarian but a virgin until 29, expressing some disgust at bodily functions. He described his Fabian wife, Charlotte thus:

”She had none of the feminine traits that I had expected and all the human qualities I had only hoped for.”

Charlotte, who did not want children, apparently insisted the marriage should not be consummated, with which he appeared happy. Yet, he was also known for philandering, often platonic in nature, what we might now call ’emotional affairs’. Quite a few women, it seems, were taken with GBS, but quite how taken he was in return required more investigation.

His letters to Ellen Terry were passionate, even during his years married to Charlotte, but it all fell apart when they finally met; the magic was lost when reality struck, though one has to admire his wordsmithery:

”I love you soulfully and bodyfully, properly and improperly, every way that woman can be loved’. Guess most wives would feel a little peeved by such words sent to another woman. Poor Charlotte.

Charlotte was, contrary to usual portrayals, a woman of strong passions. She detested her mother, adored her father, and had previously been in love with a Dr Alex Munthe who never requested her hand in marriage, but with Shaw she had more a functional, working relationship and an affectionate friendship which endured. It as perhaps enough. Or was it? There appeared little passion. As a woman who could love so completely, this dispassionate choice was rather strange. So, what was the attraction?

Her marriage to Shaw appeared devoted and companionate. Yet, another surprise was to come. When Charlotte met Colonel T. E. Lawrence (of Arabia) in 1922 when she was 65 and he 42, they established a deep and intimate (non-physical) friendship of the soulmate variety which lasted until his accidental death in 1935.

In a way that she could never do with her husband Charlotte opened up her heart to Lawrence as he did with her; they were mutual confidantes, spiritually aligned. What a curious set of relationships, what a triangle.

As is usual among my good friends, Vivienne was supportive, took everything in, discussed it, and moved on. As for me, I could not let go. I was intrigued, fascinated, hooked. That is all it took to spark my interest in this little-known woman …