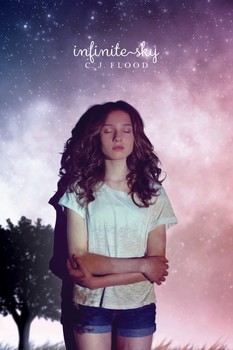 It’s a death-bed scene. C.J. Flood’s Infinite Sky, a novel of rural England, is not the stuff of idyll. No, this is ‘gypsies’ setting up home on someone’s land, bored out of their skulls vodka-drunk teenagers, poor communication between parents and their children (in particular), and trouble of the kind that involves hitting people on the head with bricks leaving them hospitalised.

The finale is emotional because it involves a deathbed scene. My first observation of death was in a nursing home where I worked in the summer of 1977. I’d been feeding ice cream to a lady who had stopped eating. She was tired. She just slipped away, but her largely toothless mouth remained open as she mumbled her way to death. We had to close her lips because an open mouth is not acceptable on a corpse. A tiny point, but important.

It is a scene if ever you are writing one, which needs to be utterly authentic.

My second observation of death was that of my own brother in October 2015.

In Infinite Sky — and also many television programmes/films —the scene is one where the family prepares for death knowing that the ventilator is to be turned off. This got me by the throat and savaged it primarily because the reality of my brother’s death was still raw.

Death, in my limited experience, is nothing like the movies (or books).

People in a hospital may ‘peacefully slip away’ but they still have ventilators and lines attached. What really happens when someone dies is that the family weeps, and hugs, and hurts, and the dying person does not have ventilation removed, but merely has the oxygen decreased to a point where the body cannot work without the additional help. There is no gentle sigh of relief as the body is released into the afterworld, nor even a judder if they are sedated.

It is actually a terribly slow and (for those attending) painful process, even if the brain-dead individual has no clue what is happening (we simply don’t know that but have to assume). In reality, the slowly dying human body loses colour, turns grey, ages before your very eyes. There is no sense of romance, no unreality. At the moment of death (though we may have missed the precise moment because even that is not certain) my brother looked much older than even ten minutes before.

There is probably no major twitch, movement, sigh or shudder (unless the person has some degree of consciousness); you only actually know what is happening by the change of pallor and the bleeps on the machine indicating an arresting shortage of activity. You like to think you will know when the actual moment of death arrives, but in reality, you read the monitors and eventually realise the pulse and blood pressure rates are zero. Even then, you require affirmation from the nursing staff that life has gone.

Do you need such detail in a novel? Probably not, certainly for most people. However, when you’ve experienced it, it certainly adds authenticity if it is written sensitively, yet correctly.

In Infinite Sky, I found myself wanting greater authenticity, yet felt distressed enough re-living reality through fiction. That said, the scene might have had a limited impact on most other readers. A tough call.