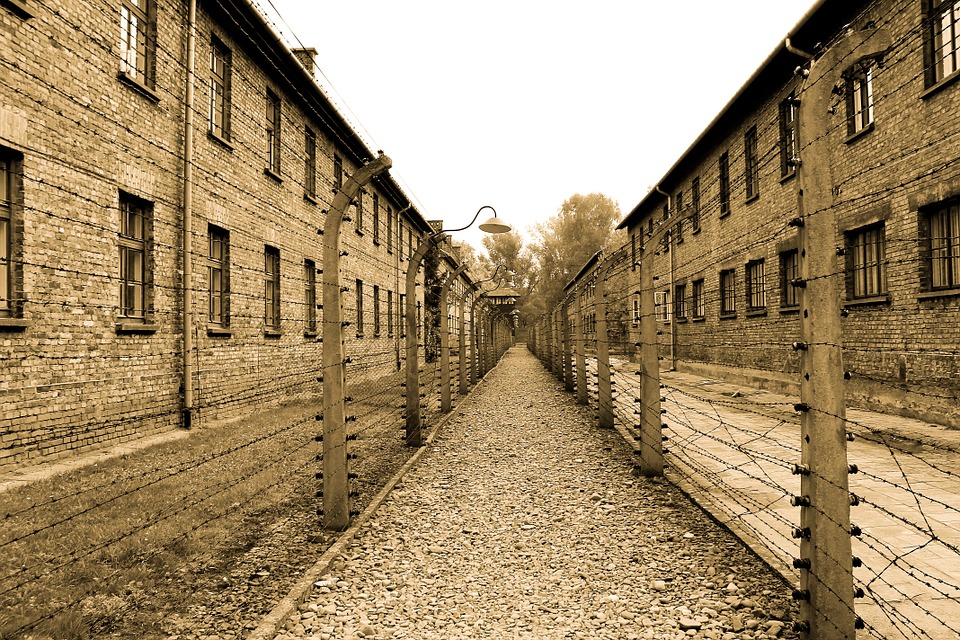 As it was recently Holocaust Memorial Day, it seemed pertinent to include my writing from my first visit to Auschwitz.

Back in the mid-1980s, I was in Linz when my friend told my partner and me that she was going to take us to a place we would never forget. She was right. It was the Mauthausen concentration camp, which became a place for the sick and weak to die during World War II (and before, dating from the Anschluss). At least 90,000 died there, a Grade 3 establishment for the “enemies of the Reich”, so it was mainly used to work to death and slaughter the intelligentsia. The extermination camps for political prisoners started in 1933 when Hitler achieved the position of Chancellor.

The visit to the Mauthausen memorial started with a film of Hitler, addressing a rally in German. People’s eyes shone with fanaticism as they watched him. Despite my not understanding a word he said, I could tell that his tone and manner were hypnotically charismatic. It was terrifying that when I tried putting myself in the shoes of his supporters, I could see how they may have been swept along. Would I have been any different? This seems an appalling thing to say, and it shocked me to my core at the time.

My friend discovered that her grandfather had been in the SS. A horrible shock but she felt that if the option was to safeguard your own family or other people’s, then there was a terrible choice to be made. I recently read a letter from a woman’s German penfriend sent in 1938 (the letters halted in 1939). She described visits to her town (Bad Godesberg) by the celebrity Führer, whom the schoolchildren joyfully saluted.

She wrote: people stand for hours to see the Führer when he visits here … we saw him again. You can hardly describe the celebrations. The Führer received flowers from small children and shook their hands in thanks. So, we can see that Hitler was well-loved, adored by many in Germany at that time. People were caught up in a wave of adulation. Sometimes, we forget that, thinking only of what we later learned about Nazi Germany.

A cattle wagon for transporting people to the camps

Fast forward to 2019, when I visited Auschwitz-Birkenau camps. This was on an altogether bigger scale. Built in the Polish town of Oświęcim, it has come to represent the genocide that was the Holocaust. Its name was Germanised. Many different groups suffered and died here: Jews, Poles, Sinti and Roma (Gypsies), Soviet POWs, Jehovah’s Witnesses, other ethnic groups and homosexuals. Academics were also incarcerated and generally executed. Prisoners were sorted according to group and strength and were tattooed on arrival, thereby losing their identities, becoming just a number. Hair was shaved, belongings removed, and a striped pyjama uniform worn, all part of the dehumanising process.

Punishments were arbitrary, including flogging, starvation, confinement in Block 11, hanging, shooting, and so on. Many were gassed on arrival. Figures of over one million killed included 232,000 children and young people. Others had medical experiments conducted on them from sterilisations to treatment with chemicals. There are really no words to describe the awfulness of this place, and I will not even try. One way to get a feel of the human side is to read The Tattooist of Auschwitz.

This is based on the true story of Lale Sokolov who arrived at the camp in 1942. He was given the job of tattooing the prisoners marked for survival, scratching numbers into the arms of his fellow victims in indelible ink. Lale was a bit of a jack-the-lad, a chancer, who fell instantly in love with a young lady he met through his work, Gita Furman. There are few life-affirming stories from the camps, but this is one of them, an almost unbelievable love story. Lale, from Slovakia, determines to survive and also to save Gita. Astonishingly, and extraordinarily he succeeds where many did not; there are a few tales of people surviving against the odds but not many.

Auschwitz-Birkenau is a monument to the Holocaust, receiving millions of visitors. Security is very tight: no large bags, checks on items, and the tours are via a wireless headset with a guide. Our guide explained the buildings and history quietly and poignantly, leaving us time to reflect. In certain parts of the memorial, photographs are not allowed, though I am sure some would be crass enough to take them if they could. I did not feel it appropriate to take any photographs inside. What you see is described well here. I have no capacity to describe the horrors of the Holocaust, and man’s infinite capacity to dehumanise others.

At the entrance to Auschwitz are the words Arbeit Macht Frei or work will set you free – the harsh reality was that ‘freedom’ only came through death. Birkenau was largely demolished by the Russian Red Army who liberated the camp, burning wood to keep warm, leaving only the chimneys in place.

We went, not to walk in the shoes of those who suffered there (for we cannot pretend to know nor would truly wish to) but to remember their suffering at this site of monument and memorial. Having visited two concentration camps, I feel I’ve seen enough, but if you have not seen any, then perhaps you should. It remains important to know and to care.